John Ransom was an organized taker of notes as a young man. That got him his military assignment. At the age of twenty, he was acting Quartermaster Sergeant for a cavalry brigade while serving in the 9th Michigan cavalry regiment. In November of 1863, the brigade was split into two smaller forces in east Tennessee, and the quartermasters were dealing with a shipment of new uniforms for the men, along with other supplies, so there was a large wagon train on hand. On November the 5th, the Quartermaster and the other officers of the unit were invited to a large party in a nearby town, and many of them went. This turned out to be a trick by Confederate sympathizers, and the start of a bizarre incident – funny until it turned deadly.

While most of the officers were away, the half-brigade with the wagons was camped at the bend of a river. The remaining officers put out a picket line of guards, but really were not expecting trouble. At daybreak, before the higher officers returned from their party, the Confederates attacked. Sergeant Ransom was ordered to ready the wagons for a speedy evacuation, and that might have worked, but the position was already surrounded. Most of the few remaining officers decided to swim to safety, abandoning the wagons and most of their men. A lieutenant found himself the ranking officer still in place, commanding most of two regiments, and the only thing that he and the remaining men could do was to stand and fight. For ten hours the surrounded Union troops fought, but much of their supplies consisted of clothing rather than ammunition, and eventually they were forced to surrender.

Thus, the Confederates captured hundreds of men and many pairs of pants. The latter were highly regarded by the victors.

Unfortunately, the rest of the story was less humorous. Like too many other men, John Ransom ended up at a new prison camp called Camp Sumter. It is best remembered for the nearby town, named Andersonville.

Of the 40,000 men who were sent to Andersonville’s prison in a short fourteen months, over 13,000 of them died. That meant that roughly 2% of the deaths in the ENTIRE WAR happened in this sixteen-acre prison camp, under the watch of Captain Henry Wirtz.

Men died of exposure, starvation, preventable diseases, and the actions of vicious guards. John Ransom spent his entire time there writing down what he saw, trading favors for pencils and paper. By war’s end, he had a detailed journal of the horrors.

Years later, when he published his journal, he supplemented the book with a list of the deaths, compiled by another prisoner who had worked as a trustee in the camp office, secretly keeping copies of the death logs. 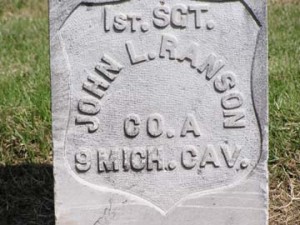 From the 1880s to the present, John Ransom’s Andersonville Diaries have remained in print, and were the source material for many historians and Ted Turner’s 1990s movie about the prison camp.

When John Ransom died in Pasadena, the War Department clerk processing headstone applications was less careful than Ransom had been. Thus, his headstone arrived with the name spelled “RANSON,” literally a typo set in stone.

Mr. Smith is a co-curator of the exhibition When Johnny Came Marching West: How the Civil War Shaped Pasadena.