Skip to content
Masks required for all indoor activities at PMH

In the talk I gave for ArtNight, there was a whole type of board game that I didn’t really mention, and that’s partly because it takes a little explaining.

In traditional board games, someone wins, and someone else (or everyone else, if there are more players) loses. There is a whole type of game, though, in which that’s not quite what happens.

In some games, everyone wins or everyone loses. This allows players to work together toward a goal within the game, or play a game in which the players are all on the same team. For example, it would be difficult to play a game in which the players all represent the crew on the bridge of the Enterprise in a Star Trek game, and have results where only one character wins. What would a solo victory in such a game mean, anyway? That Klingons only destroyed the parts of the ship where the other characters were standing? Or that only some of the characters got covered in Tribbles? No, a co-op game, as these are often called, allow for players to work together, and they can be very challenging. For players who like beating the game, rather than just other players, this format can be very popular. 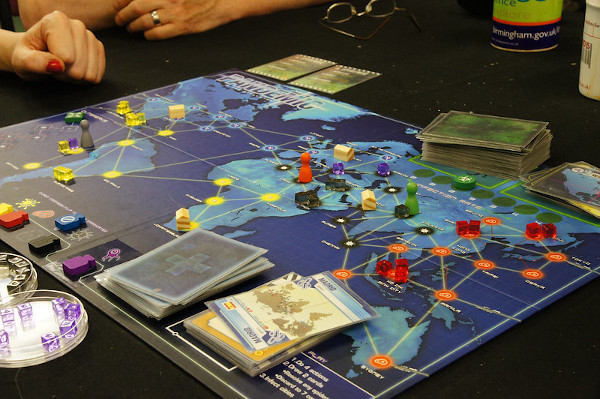 One of the most popular games of this type is called Pandemic. It has spawned sequels, variations, and even other games using its mechanics, like Pandemic: Fall of Rome. In the original game, each player represents some part of an international team that is trying to squelch various forms of a virulent disease, one that is sweeping the world. No, this game didn’t come out as a result of COVID-19. Pandemic first came out in 2008. Its victory conditions make it difficult enough to win that it’s a real challenge, and players who win feel a shared sense of satisfaction. That is true of any good co-op game, although some are designed to be easy to win, especially ones created for younger children or beginning gamers.

In the case of Pandemic, each player’s marker moves from city to city, around the world, helping put down disease outbreaks and also gathering the resources to develop cures for the various disease forms. Once the outbreaks have all been stifled and the diseases cured, the players win the game. Or, if things go badly, the players lose and the death toll mounts. This is not a game for the faint of heart or people with too vivid an imagination.

So, how would you play that kind of game, but about the Fall of Rome? Oddly enough, the mechanics convert very well. Think of mobs of barbarians, rather than pools of viral hosts, and you move the military and financial resources of the Roman Empire around to reduce the chance of Rome being reduced to a pile of rubble.

Many co-op games are about stories converted from literature, TV or movies. As mentioned, there are Star Trek co-op games, but also ones based on the Harry Dresden novels, the Alien movies, the Teenage Mutant Ninja Turtles comic books, and a host of other things. There are also ones based on simple fictional concepts, rather than a specific literary source. What if you’re the crew of a spaceship and the captain has just died? How do the rest of you find a way to make it home safely? Or, what if you’re a group of aliens whose flying saucer has crash-landed on Earth? Can you fix things and get home? Or what if you’re the loyal defenders guarding a castle from assault, and each of you is assigned the protection of one part of the castle. The only thing they really have in common is that the players are working toward a common goal…or are they? 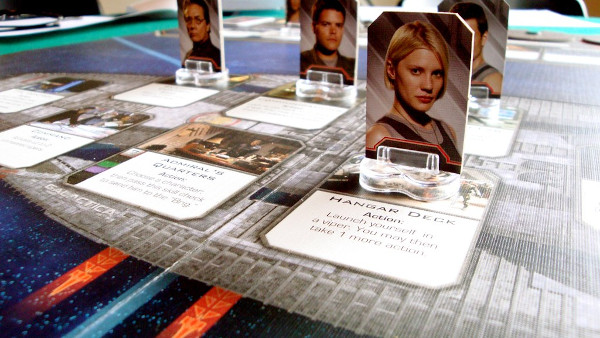 You see, there’s also a variety of co-op games in which almost everyone is working together. What if one of the players is secretly a villainous traitor, working against the others? Or, what if one of the actual good guys gets taken over by a ghost, partway through your haunted house adventure? In the case of a board game based on the Battlestar Galactica TV remake, one or more of the players are playing characters who are not who or what they seem to be. So, it can be a co-op game with more than one side, or with a chance of a player being part of the game’s set of bad guys by the end of the game. There are games based on the King Arthur stories, or a wide variety of other themes, many of which are from folklore or fantasy settings. If you want a mostly co-op game with a little more thinking about the other players, this can be a good type to experiment with.

So, co-op board games can bring a lot of variety to your game table, and can be a lot of fun…or a lot of anguish, if you let the bad guys win too much of the time.

Nick Smith's pre-recorded ArtNight Pasadena, From Senet to Monopoly to Terraforming Mars: 4,600 Years of Board Games, will be available for viewing as a limited release from November 4 through November 7 on the PMH YouTube Channel.