Skip to content
Masks required for all indoor activities at PMH 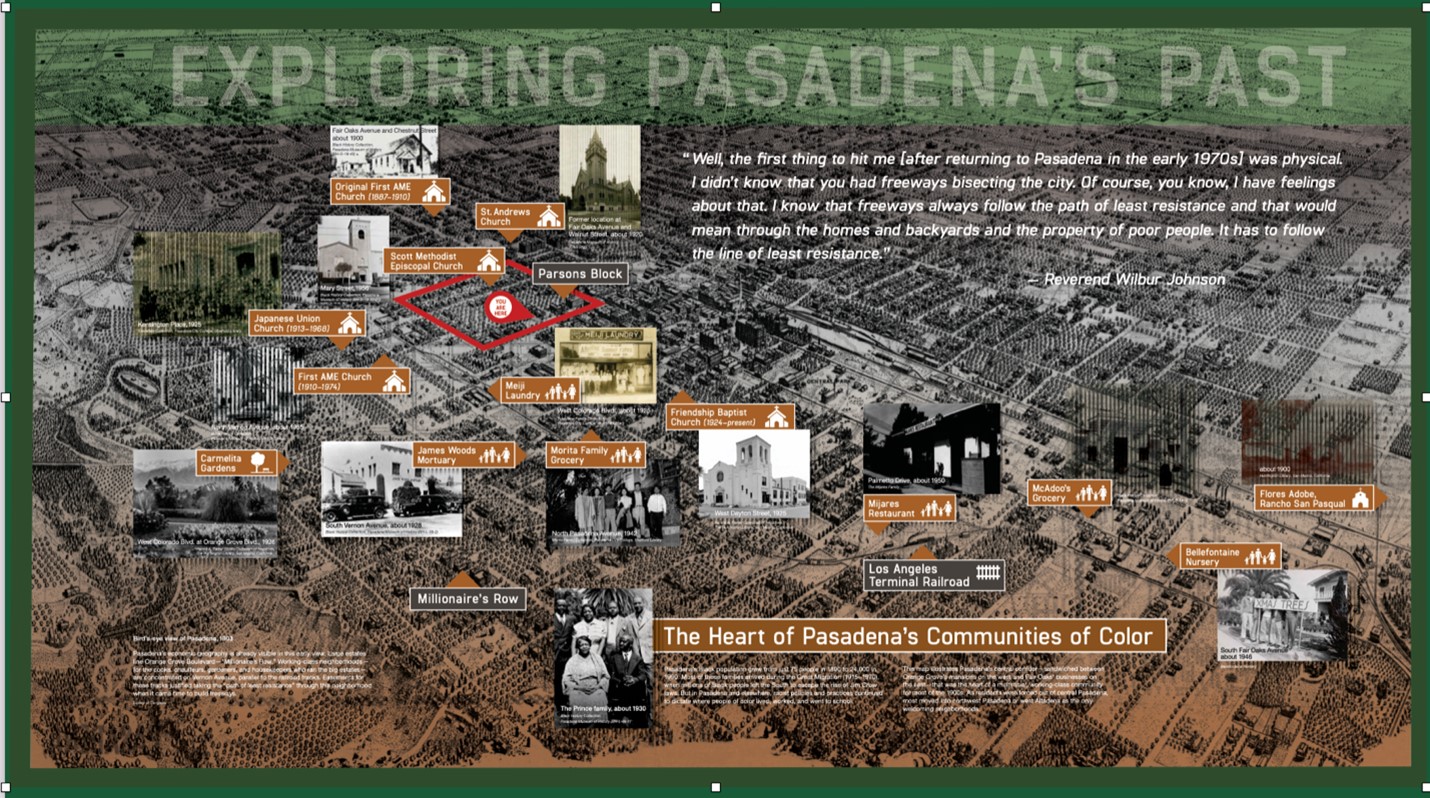 A recently unveiled outdoor exhibit at 100 W Walnut provides a new way to look at Old Pasadena. “Exploring Pasadena’s Past” is dedicated to remembering the residents of a multiracial community that lived at the heart of Pasadena before “urban renewal” forced them to pack up and sell their homes, relocate their churches and businesses, and sometimes, leave Pasadena for good.

Beginning in the late 1800s, Pasadena’s earliest Black residents arrived with a host of skills and high hopes for a new beginning. Joseph Holmes drove a cattle herd from Nebraska to Los Angeles in 1883, buying a vineyard in Pasadena with the proceeds. William and Frank Prince left Tennessee in 1886 to find work in Pasadena’s wealthy neighborhood as a porter and coachman. Their brother Charles soon followed and helped establish the first Black-owned business in town, Prince Brothers Feed and Fuel. Like thousands of other early migrants, Booker and Carrie McAdoo arrived here in 1899, seeking a healthier climate.

One of Pasadena’s early civil rights leaders, Seaborn B. Carr, arrived in Pasadena from Georgia in 1893. An active member of Scott Methodist Church, he helped organized Union Day picnics to celebrate the end of slavery. He was a whitewasher by trade, but as his daughter-in-law Clara recalled, he did “maintenance work [for a living], because at that time we couldn’t get anything worthwhile to do.”

Although many Black Pasadenans escaped the Jim Crow laws of the Deep South, they couldn’t escape discrimination. As one resident recalled, “You couldn’t eat in the restaurants; I mean [even] little hash joints . . . didn’t want to serve blacks.” Another resident remembered segregated seating in movie theaters: “The Pasadena Theater at DeLacey and Colorado, the Fair Oaks theater, you could go, but they segregated where your seating was.”

Over decades, the NAACP and other groups successfully fought and won multiple discrimination cases. In 1947, for example, a decades-long battle finally opened Brookside Plunge, the city’s public swimming pool, to everyone. Local hospitals, restaurants, theaters dropped restrictive policies, too.

Most Black residents lived in neighborhoods clustered along Vernon Street (removed for freeway construction), in northwest Pasadena, and west Altadena. Restrictive covenants and other racist practices prevented most people of color from living outside these tightly constrained neighborhoods.  Despite the Supreme Court’s 1948 ruling against restrictive housing covenants, housing discrimination has continued through unfair lending practices, entrenched segregation, and lack of affordable housing. In the 1970s, many downtown residents were forced to move by eminent domain to make way for the Parsons Corporation headquarters and the Foothill Freeway.

Despite these challenges, the people of Old Pasadena created enduring businesses, churches, and communities that have shaped the city’s landscape culture. Discover more about the people, places, and faces of Old Pasadena by “Exploring Pasadena’s Past.” The main exhibit panel is located at the intersection of Holly and Pieroni Street. 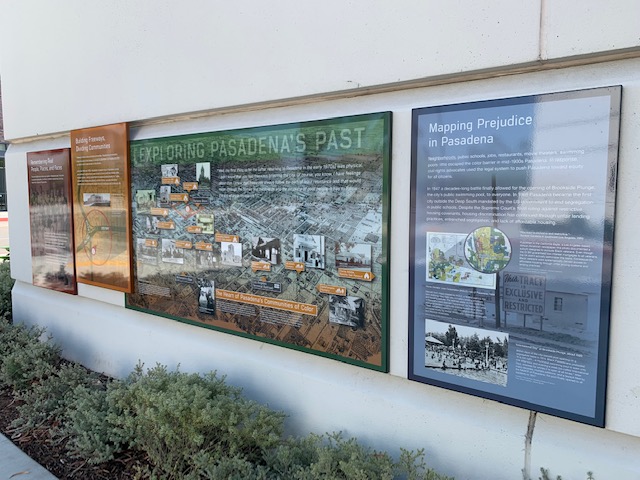 Exploring Pasadena’s Past panel at the corner of W. Holly Street and Leonard J. Pieroni Street

In partnership with the City of Pasadena, Lincoln Property Company provided the exhibit signs to commemorate the stories of the mostly African American, Mexican American, and Japanese American families who lived in the neighborhood before eminent domain forced them from their homes.